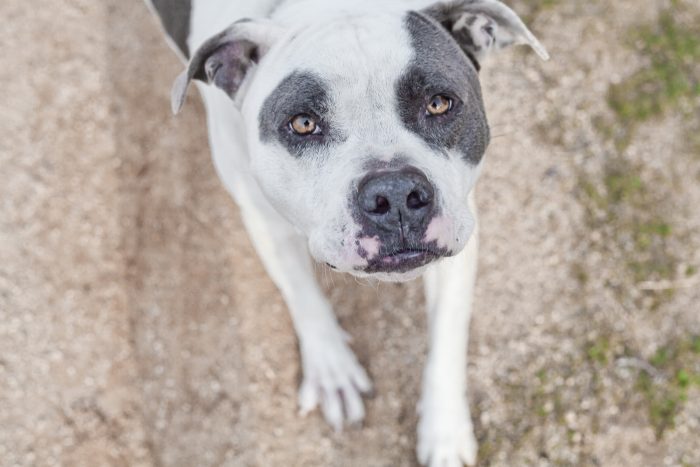 Skooter is a pit bull. But he’s harmless! Can’t you tell?

This is Skooter, our pit bull. Jun rescued him from my sister’s home, where she discovered him abandoned by his previous owner upon moving in. She’d been taking care of him for some time, but couldn’t continue to do so due to her daunting schedule. We’d asked around if anybody wanted him, but everybody was afraid to take him in because 1) he’s a large dog, and 2) he’s a pit, so everybody was hesitant.

Jun picked Skooter up and gave him to a friend, but he went from home to home and eventually landed back in Jun’s arms. He’s a dream to have – young and energetic, protective, confident, obedient, and extremely gentle with kids and even my small wiener dog.

And they say pit bulls were terrible, dangerous animals? 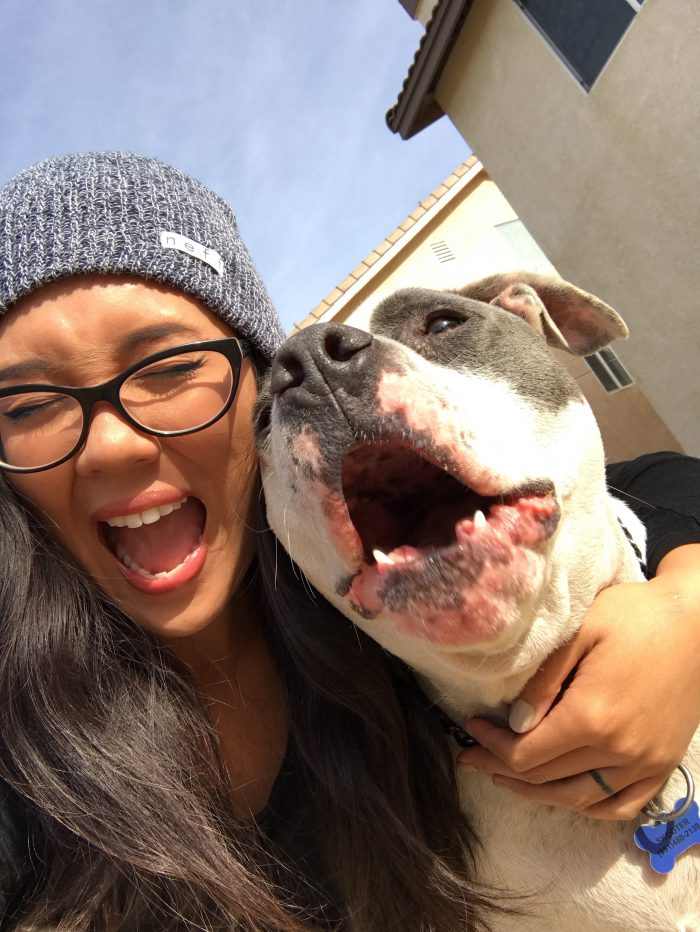 Careful, or he’ll attack you with kisses.

We love Skooter so much – he brings us so much joy and keeps Jun company in the garage when he works on his cars. Sometimes he’ll even pull Jun’s creeper seat out from under the car with his paw, begging him to play, and although Jun can get frustrated, it’s the cutest thing I’ve ever seen.

So you could imagine how terrified we were when we nearly lost him.

Last Sunday evening I was in bed by 9PM with a hot cup of tea and my laptop, ready to do a bit of work before catching some sleep. Unexpectedly, Jun burst through the door and in rushed words muttered, “We need to take Skooter to the emergency pet hospital right away. He’s bleeding out.”

We were both flustered, running up and down the stairs, and I dashed for the garage while making a phone call to the vet. Jun’s dad had his hand over our pit bull’s belly, and there were puddles of blood everywhere.

The next few moments were fleeting – I remember arguing with Jun about who would drive, who would hold Skooter, and how we’d transport him. I’d only ever driven the Ford F250 less than 3 times, and my vision was awful at night. The closest vet hospital that was open at this hour was a 30-minute drive through a dark and winding canyon notorious for claiming lives, so I was getting anxious because with Jun’s race car right out in the driveway, his father had to close up shop to prevent theft (we’ve had a few incidents in the neighborhood, and we’ve grown quite weary of a particular group of new neighbors). I didn’t know how to stop the blood, so that meant Jun had to sit with Skooter while I drove this big ass truck through the canyon and had to focus on not killing everybody in it.

Jun is a very composed man, so when he uttered the words, “Skooter’s not going to make it,” I panicked. I hopped into the car and screamed at Jun to haul Skooter’s huge butt into the passenger’s side because I wasn’t going to have them sit in the truck bed together and get tossed out through the winding canyon.

The drive to the hospital was crazy. It was dark, I could barely see, and was praying that we wouldn’t be stopped by a train because that would mean another 15 minutes of waiting for it to pass over the tracks. Skooter was seemingly uncomfortable and started to get extremely quiet, so we continued talking to him to keep him conscious. Jun couldn’t even see if his hand was on the wound, and there was blood everywhere – all over the leather, the carpet, the ceiling. It looked like a murder scene.

We got to the hospital in one piece, where the staff ushered us in and bandaged him up while waiting for the vet to finish with his other patients. Eventually, the vet came in and took Skooter, where we could finally sit and relax for a bit. Then we both started thinking about how expensive this vet bill was going to be. Using his phone, Jun transferred $1,000 into his checkings account from his savings because we already knew that with this sort of wound he would need surgery, and bigger dogs often mean bigger bills.

The vet explained to us that Skooter had been itching at his sunburns and created a strange scab, in which the scab was somehow ripped off, opening up a blood vessel. The vessel needed to be ligated and the site had to be stitched. Of course, we agreed to the procedure, so they said they would come back with an estimate. We were dreading the bill, knowing it was going to be pricey.

Fortunately, one of the vet techs knocked on our door and sat down with us. Before anything, he gushed about how well-behaved Skooter was. In all his years of work, he’d never seen a large breed, let alone a pit bull, behave so well. Their staff poked and prodded at him, but he sat quietly, letting them touch him despite his pain and discomfort. He told us that we were lucky for having rescued a dog that was so well-behaved, and even thanked us for bringing him in because he would have died from blood loss.

He went further to explain that because Skooter was so cooperative and docile, they didn’t see a need to use general anesthesia and put him to sleep during the surgery. The vet was able to perform the ligation and stitching using local anesthesia alone just to numb the area. Larger breeds tend to need general anesthesia as a result of showing resistance. The tech explained that for this type of operation we would have been looking at well over $1,000 at the minimum, but because they were able to limit the use of anesthesia, the bill wound up being only $592.21.

Hallelujah. My dog and our wallets were safe.

After about 2 hours of waiting, they finally escorted Skooter out with a cone around his neck and the final bill in hand. Although we’d expected for it to be higher, the final total actually dropped just over $100, bringing it down to $485.97. Jun sighed a sigh of relief as he grabbed for his debit card instead of his credit card.

Fast forward a week later, and Skooter is as happy as ever, as if nothing happened.

Having a dog is definitely not an inexpensive investment, as it’s very similar to taking care of a child. Accidents like this can lead to thousands of dollars in medical bills, especially when it comes to bigger dogs whose injuries and procedures can compare to the size of a human.

Many people get dogs without realizing the expenses or commitment involved. Too many people raise ill-behaved, neglected and hostile dogs, making it much harder for the dog and owner to create a healthy relationship. Had Skooter been the typical “mean” pit bull, he may have put up a fight and would never have made it to the hospital alive. If he did make it to the hospital, we would have been hit with an even heavier medical bill.

That said, accidents happen and it’s good to have extra money for these times, but our beloved Skooter’s great behavior really buffered the blow to our finances. Of course, we would have paid any amount of money to save what we consider a family member, but we were able to move on from that day and not let this one instance become a financial setback.

So thanks Skooter – I know you probably weren’t thinking of this in a financial perspective, but thanks for being a model citizen. 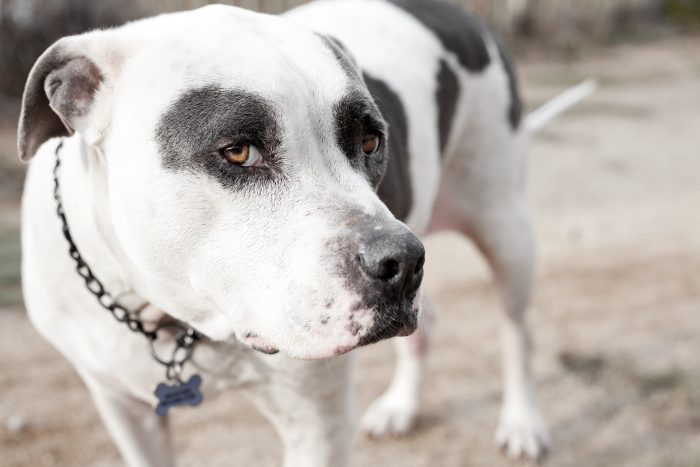 What’s the scariest or most expensive bill your pets have given you? Tell me in the comments!