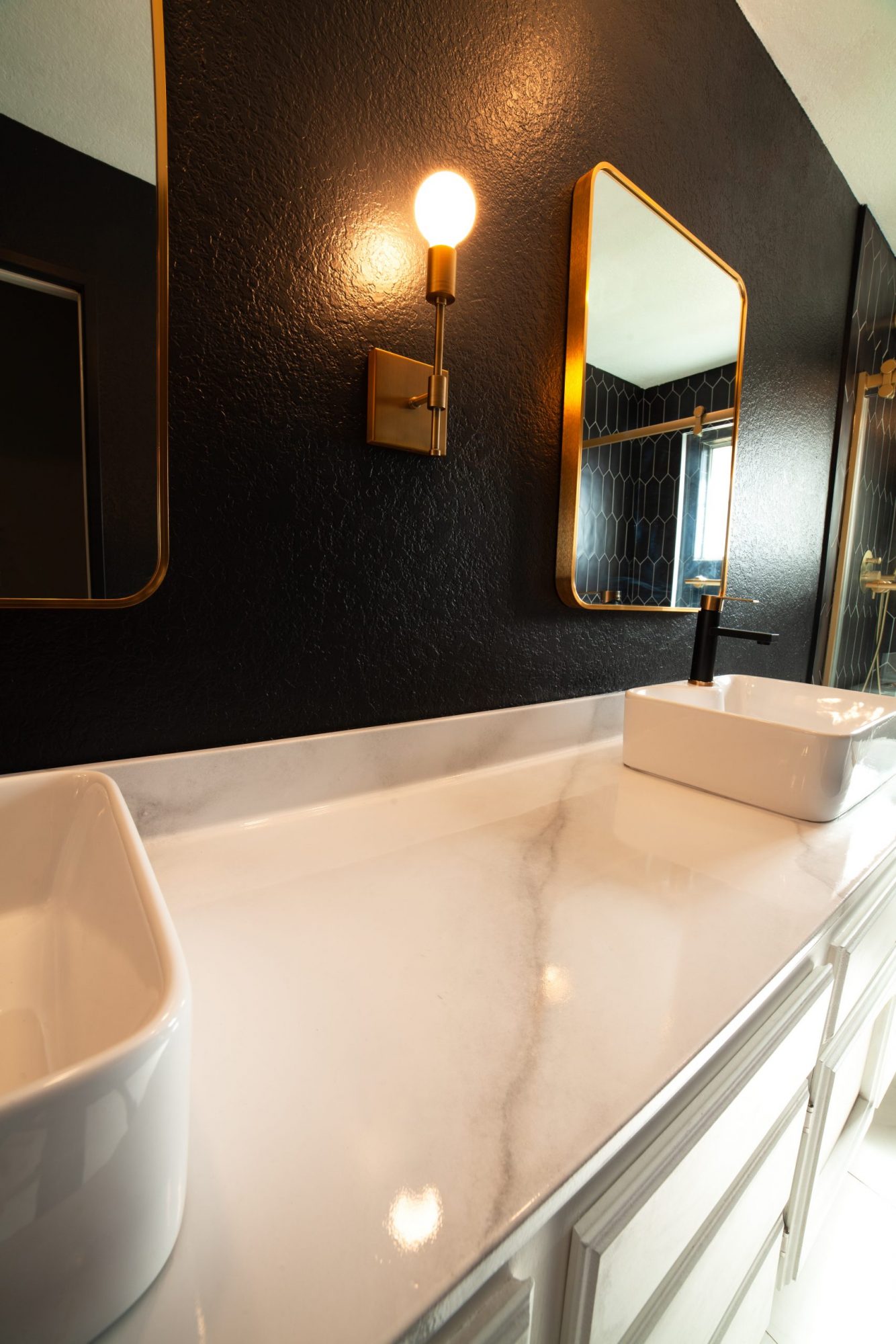 This hallway bathroom update is long overdue, but we’re finally excited to share photos of our updated bathroom counters! I started this project in March but fell severely ill due to some autoimmune flare-ups… and then we faced the onslaught of the pandemic, which made it impossible for us to go to the hardware store and get the rest of the plumbing supplies for the sinks. So while this project took a few months to get done, I just wanted to let you know that “marble-izing” your counters can take only one weekend, or a few days if you’re taking it slow!

The counters and cabinets throughout our house are a bit too dated for me, and Jun and I have discussed replacing the cabinet boxes countertops in the future. However, due to the exorbitant cost, we won’t be doing that for at least another 5 years. Naturally, painting the cabinets (tutorial here) and counters seemed like the most cost-effective and achievable solution for us, and it worked out so well.

Here’s a little reminder of what our bathroom looked like before: 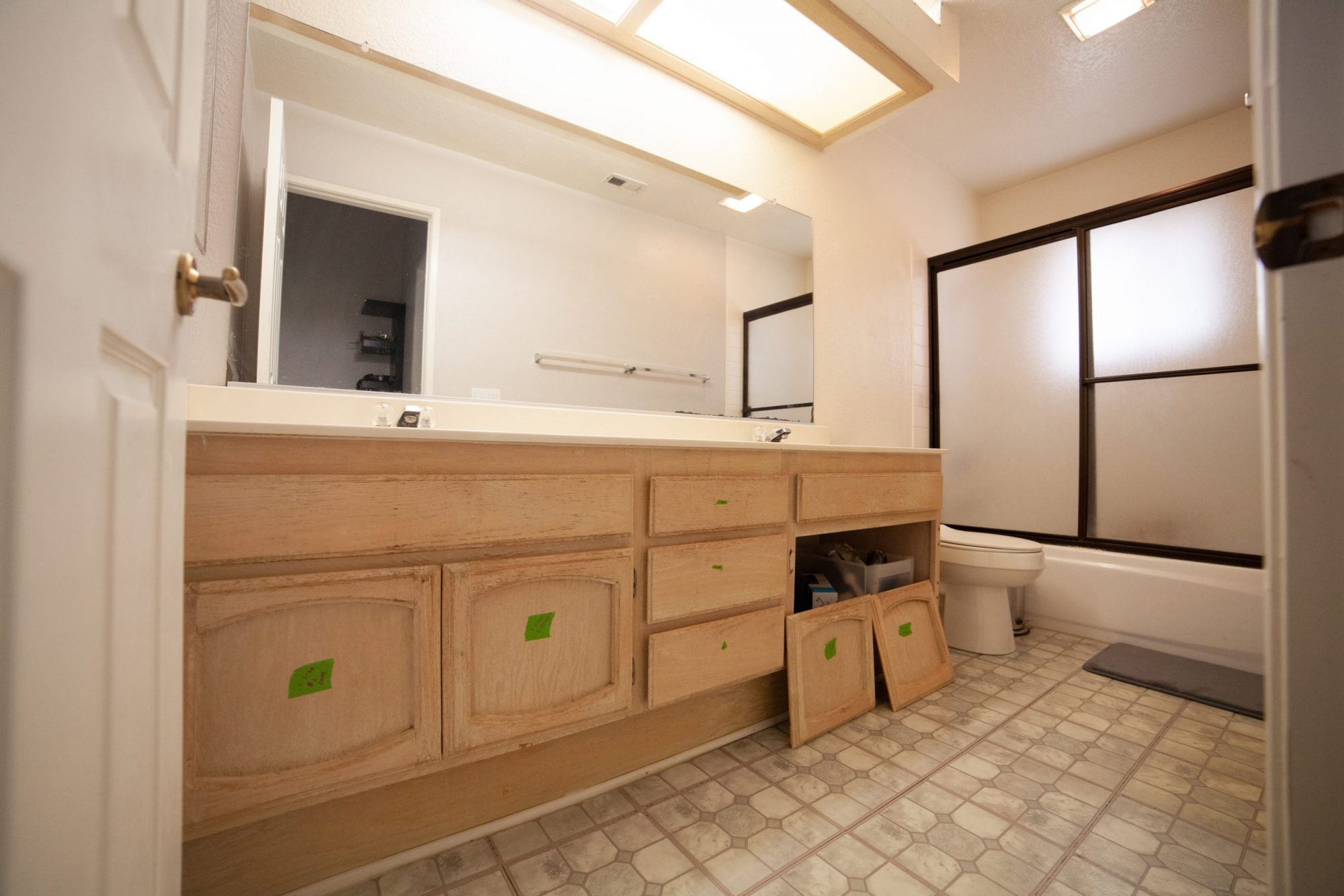 And here’s what the counters looked like with the original cultured marble prior to installing the sinks: 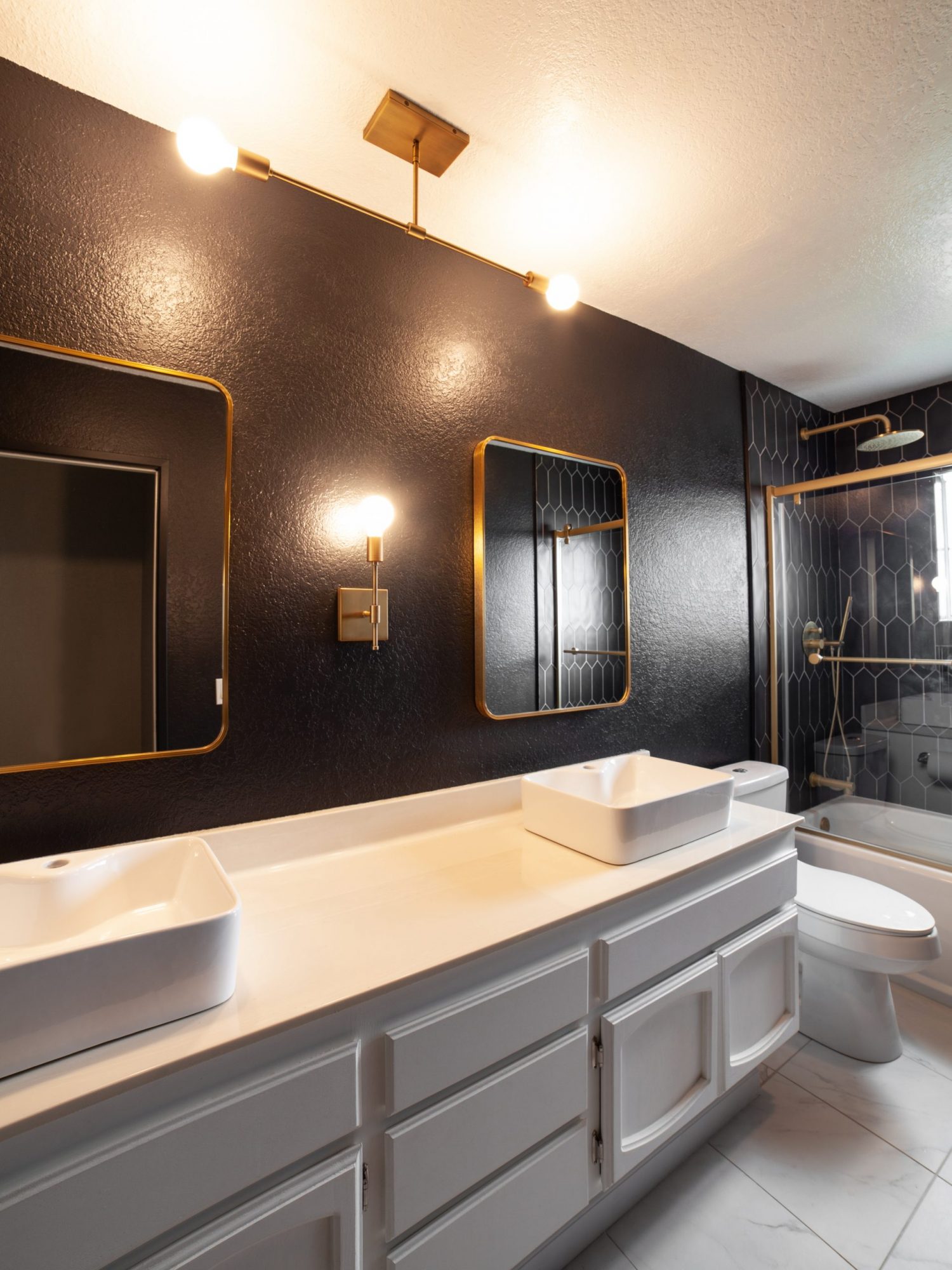 We had old beige cultured marble countertops (the yellow doesn’t show in the picture), integrated sinks and very 90’s style faucets, and they needed to go. Honestly, the whole bathroom had to go.

Here are the previous updates on this bathroom:

Giving our old countertops a facelift was surprisingly pretty simple with Giani’s Countertop Paint Kit. I strongly recommend considering using one of their many kits if you want to dramatically change the look of your counters but don’t want to spend the money on brand-new countertops. I documented the process on my Instagram stories, so be sure to check out my “4 BATH RENO” highlight to see videos of the step-by-step process!

Giani countertop kits are complete with basically all of the tools you need for this project, which took out a lot of the guesswork and time needed to assemble all of the supplies. The marble kit has a few more items in the kit compared to the granite kit, but for the most part, the kits include everything you need and come with instructions, so you know exactly what to do.

The process was pretty simple for us because the original counters had integrated sinks, so we didn’t have to do any complicated work that was too far out of our learning curve like installing an under-mount sink. Jun simply removed the faucets and cut a hole through the cultured marble (which almost felt like acrylic) to lead the plumbing directly to the vessel sinks. Choosing vessel sinks over any other style of sink is the easiest type of sink installation, so if this is your first time replacing sinks, I recommend vessels all the way. 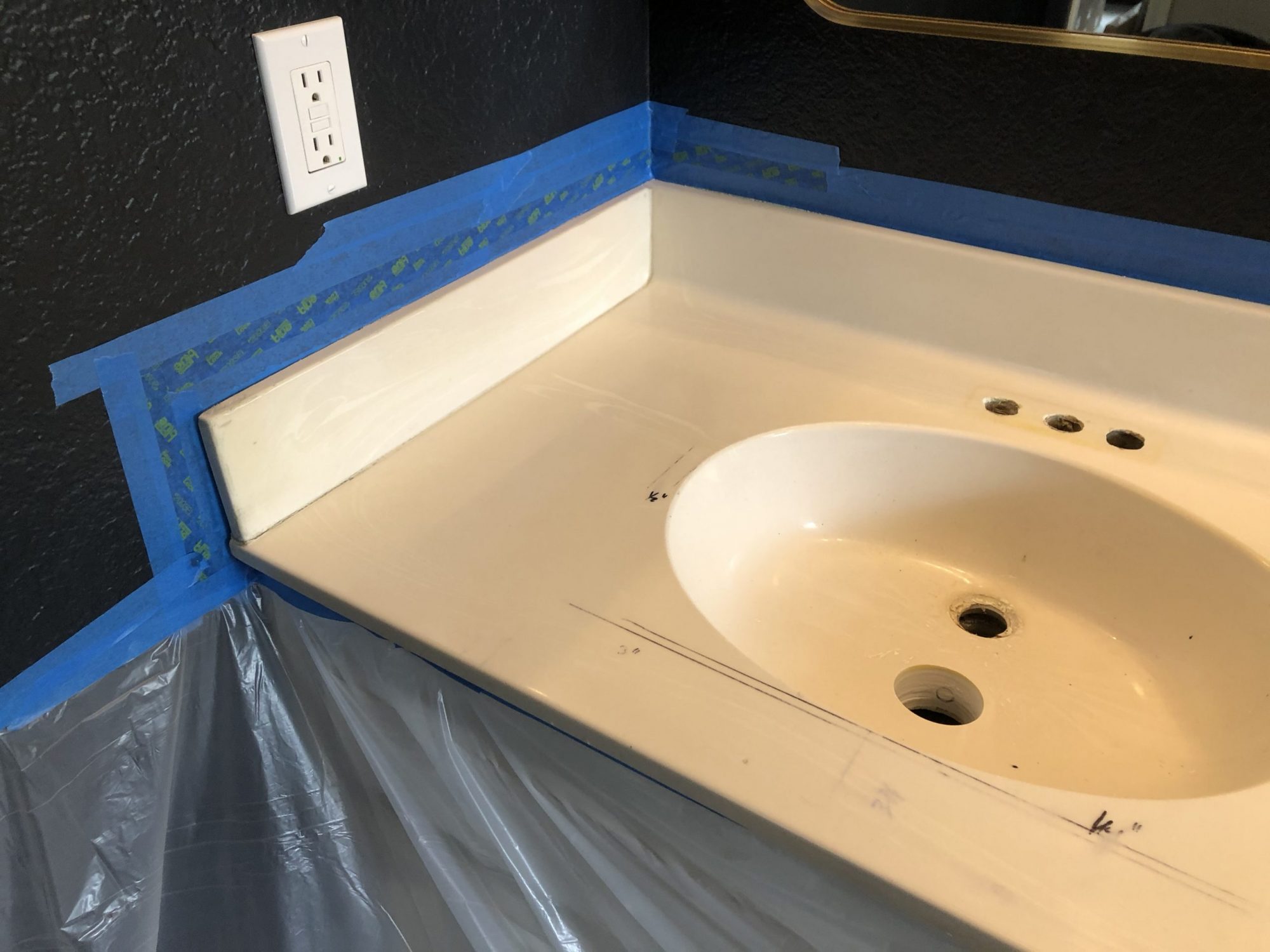 After we took the measurements for the plumbing, all I had to do was thoroughly clean the surface. I used a multipurpose cleaner, a scrubbing sponge to remove any gunk, and a razor to remove the caulking around the edges (the kit advises to do this so you don’t paint over old caulk). After that, I taped off the edges and made sure to use the included plastic tarp to cover the surrounding floor and toilet.

Using the included roller brush and white paint, I rolled the first coat of paint. It looked really patchy at first, but I allowed about 3-5 hours in-between coats and then did a total of 3 full coats with a 4th layer of touch-ups. You can actually move onto the next step after a few hours. 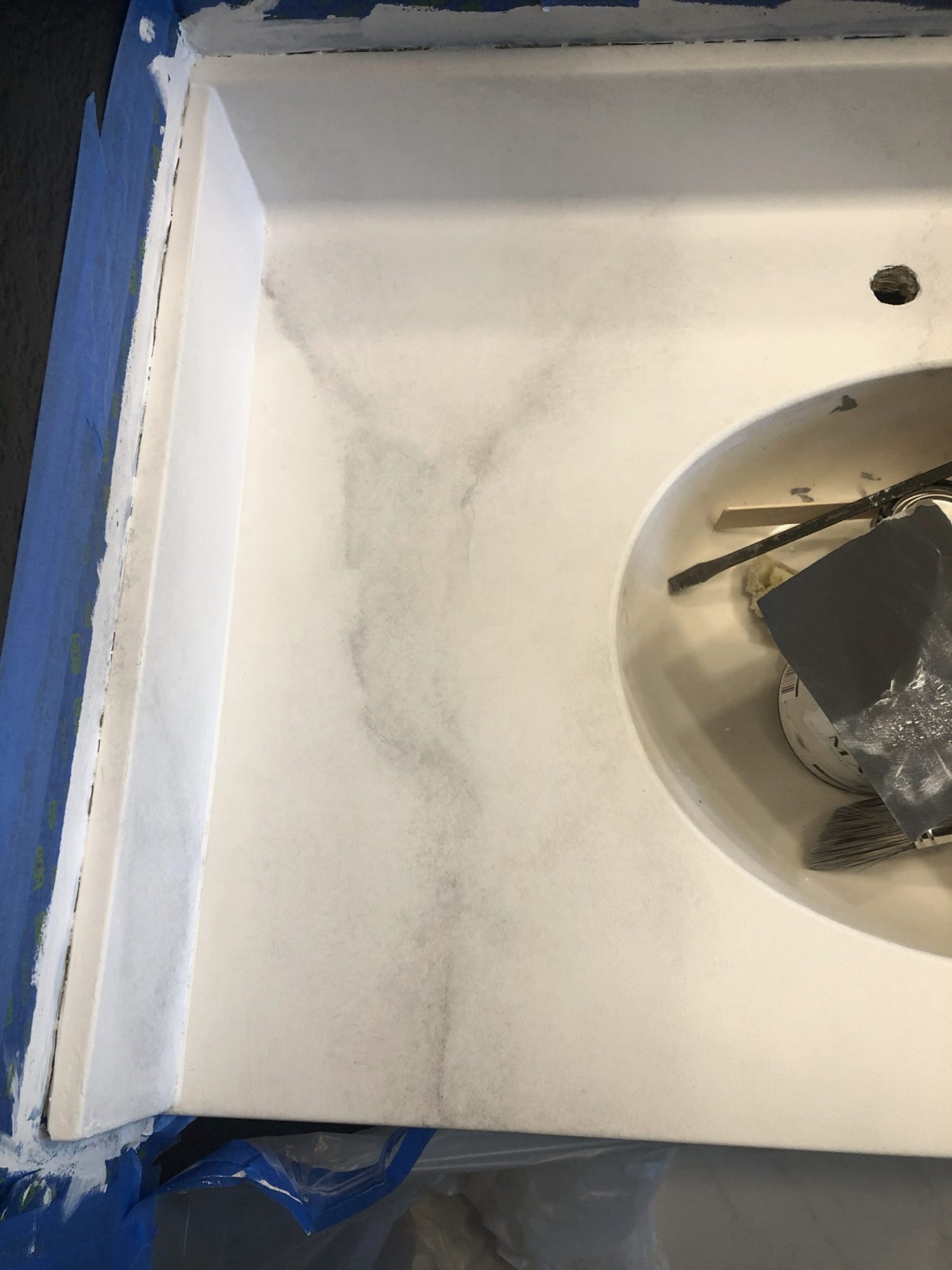 Painting the marble veining was probably the most time-consuming part, as it requires a bit of creative thought and trial-and-error to produce your desired look. Giani recommends to go online, look at samples of veining you what to mimic, and use the included foam core board to practice your brush strokes. There is definitely a trick to making it realistic, which can be found in Giani’s instructional video at 2:47. You can also see how I did this on my Instagram highlight.

Using the included brush, I used a small amount of grey paint and drew veins. Then, I used the included spray bottle filled with water and sprayed the lines to let them soften and feather out. The first round didn’t have a very defined line, so I had to go back every few hours and then add more definition by layering more paint on. I also used the included sponge to create some texture and shadow surrounding the veins, which mimics the natural texture of marble.

I was worried about messing up, but since the grey paint is basically just, well, paint, I just wiped it off with a damp towel and started over. I was able to make a lot of mistakes and fix them until I got the desired look. At first, the veins didn’t look realistic, and then I wound up painting too many veins, which made the counters look like they had zebra print. I wound up covering up excess veins with the white paint. Less is more.

The last step is completely optional, but you can use the white highlight paint and stipple it around the grey veins to create a subtle highlight. I actually recommend this step as it gives more depth and a realistic texture that resembles marble.

After the final layer was complete, I let it sit overnight before moving on with the epoxy topcoat. 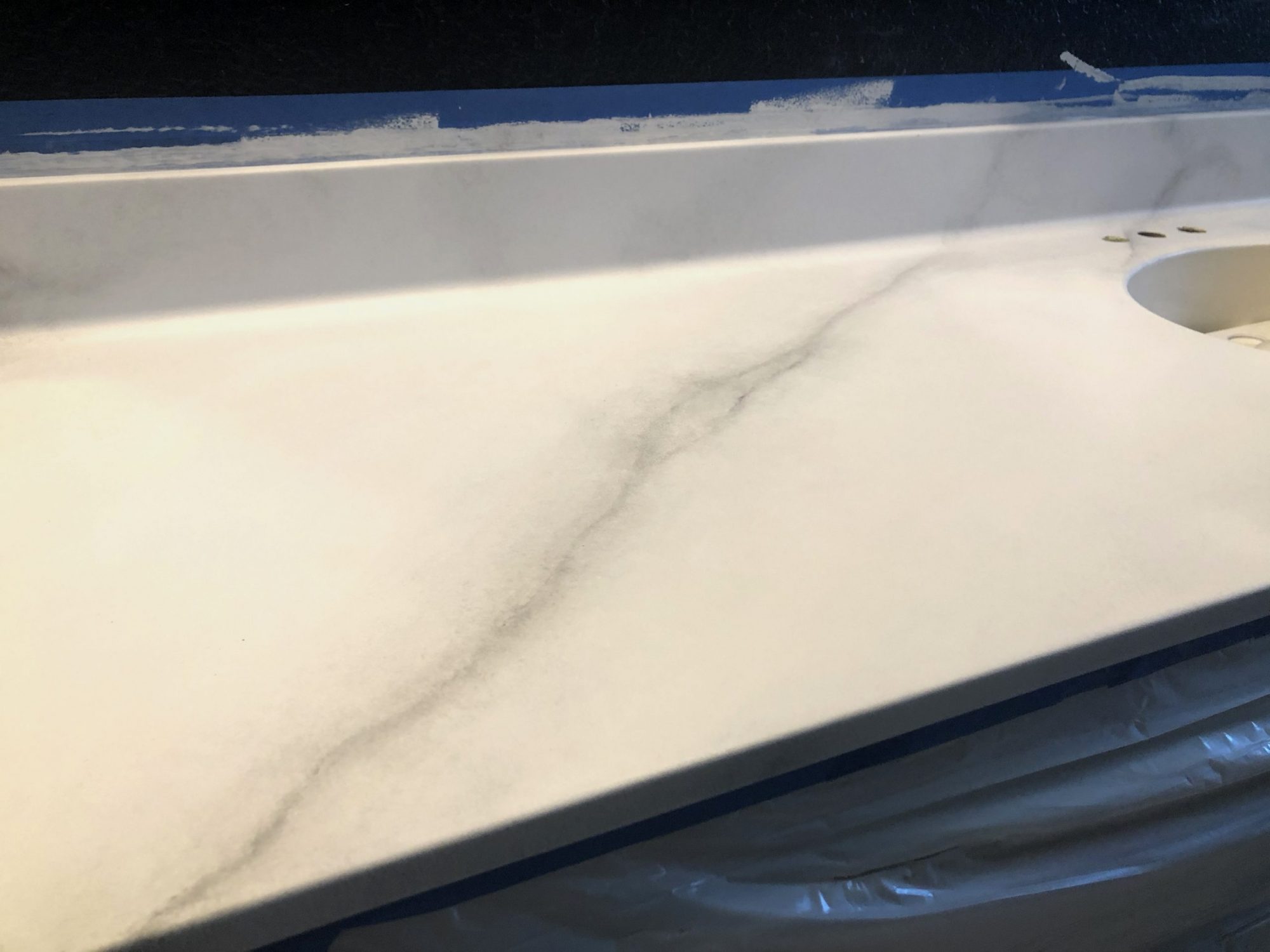 After I finished, I very lightly sanded down some spots where the paint was lumpy, careful to avoid painting the grey veins (otherwise, the white paint underneath would show through). Then, I made sure the surface was free of dust, dirt and lint. This part is incredibly important because lint will dry up within the clear epoxy and will be visible and bumpy when it dries. I also used painter’s tape to roll on a fresh paint roller to remove the lint.

Mixing the epoxy activator into the ultra epoxy resin is time-sensitive, so you have to stir it for exactly 3 minutes and 15 seconds and then pour it on your counter and rolling it with your roller, working in small sections at a time because it hardens quickly. After you mix it, you have about 30 minutes to coat everything evenly before it becomes really hard to work with after that. 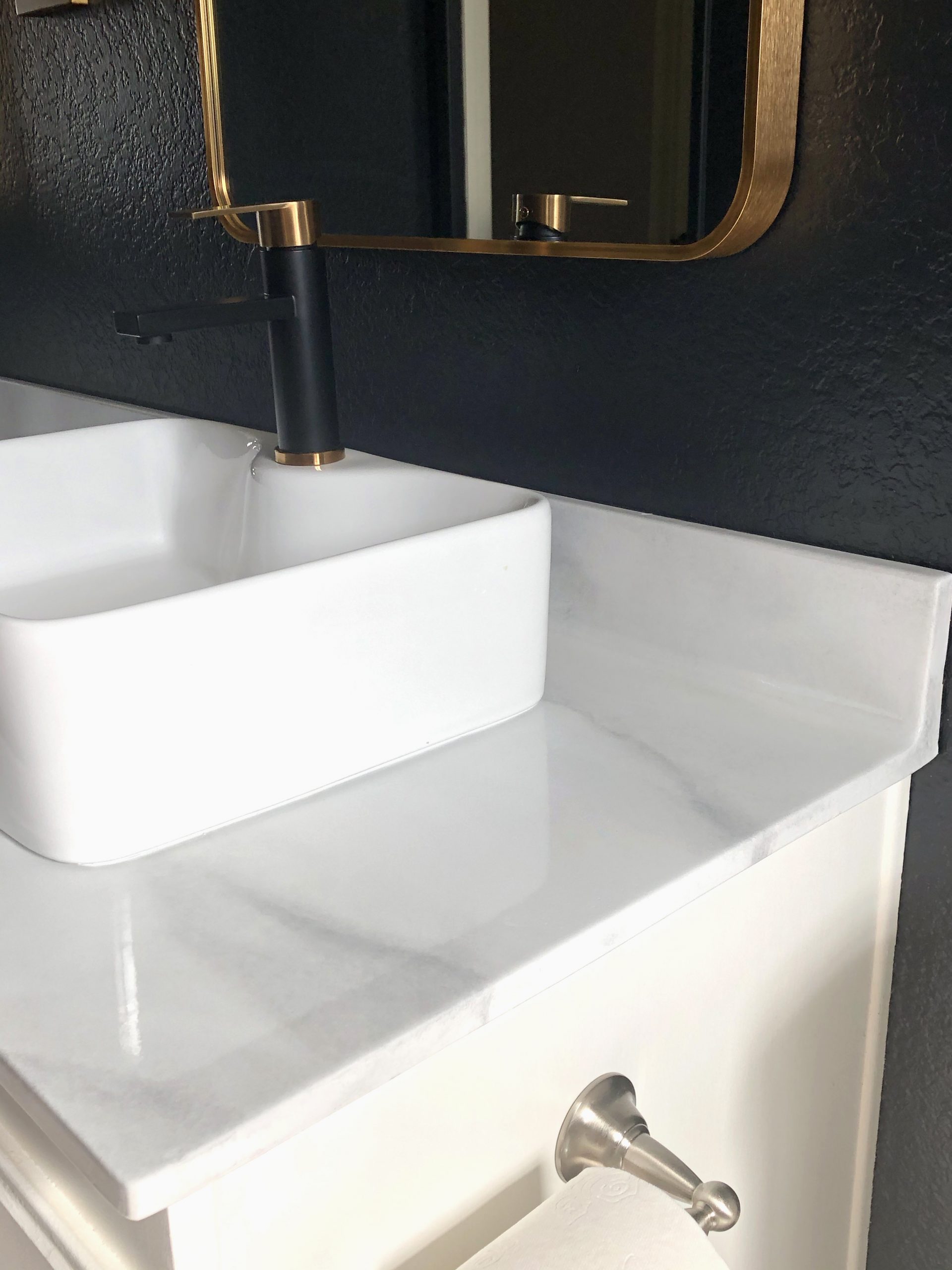 As it was drying, I was sure to use a pointed pair of tweezers and quickly tweeze any lint and debris from the surface. It is absolutely important that you de-lint your roller with painter’s tape to greatly reduce the amount of potential lint you’ll be picking ot.

After 1-2 hours I removed the surrounding tape so the epoxy wouldn’t harden on it. I also used a razor to carefully cut any tape that was sticking on the epoxy so that it wouldn’t lift the epoxy off.

The epoxy becomes tack-free in 6-8 hours, and after 48 hours you can lightly use it. I held off for a few days just to be sure. After a week, they were solid and we were able to install the sinks and start using our bathroom!

Was Painting My Counters Worth it?

You may be unsure of painting your counters at first, but I strongly recommend it if you want a drastic makeover without paying thousands of dollars on brand-new countertops. Epoxy is a very tough finish and when taken care of can last a long time, especially if you’re using it in places that don’t have that much heavy counter use, like the bathroom versus the kitchen. 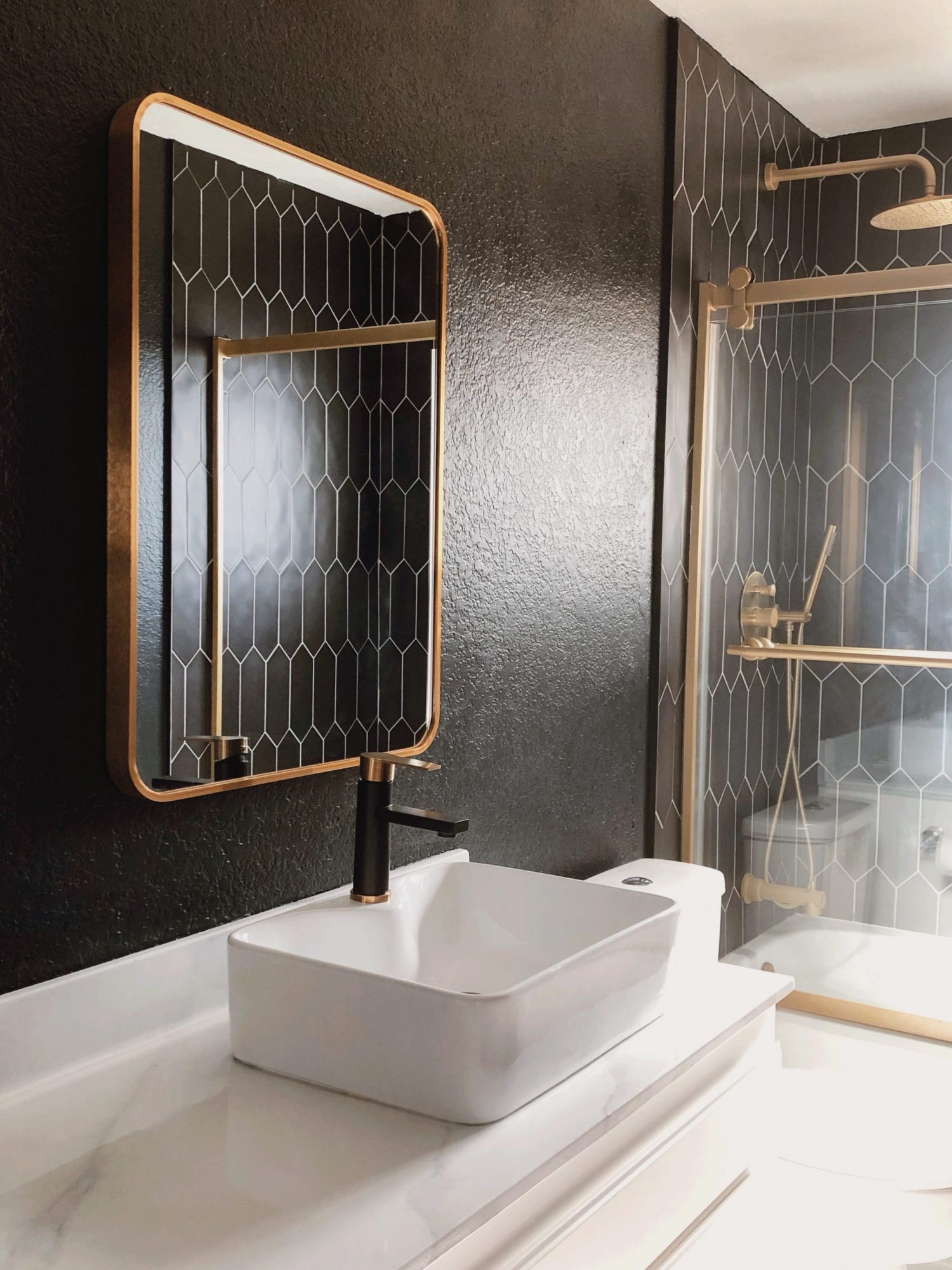 I admit that during the painting process I was growing a bit unsure, but after I took some time to practice my painting, it got much more easier. There is a little bit of learning involved, but there is a lot of room for error since you can always wipe off the grey paint and start over if you don’t like it.

I also wanted to bring up the value of this kit: the marble kit costs $179.95, but comes with 3 sets of epoxy activator and epoxy resin. I didn’t use much white paint and hardly used any of the grey paint for the veining. As for the epoxy, I still had about half of the can left after I completely covered my counters (and we have a 2-sink counter), so you could probably do two bathrooms at the same time if you were quick enough and had assistance. I still have enough paint and unmixed epoxy left to do both the master bathroom as well as the other guest bathroom (which I will be doing later this year, hopefully), which means that the $180 can actually cover much more than one bathroom! Side note: if you’re looking for a granite-look counter, their granite kits are only $79.95. 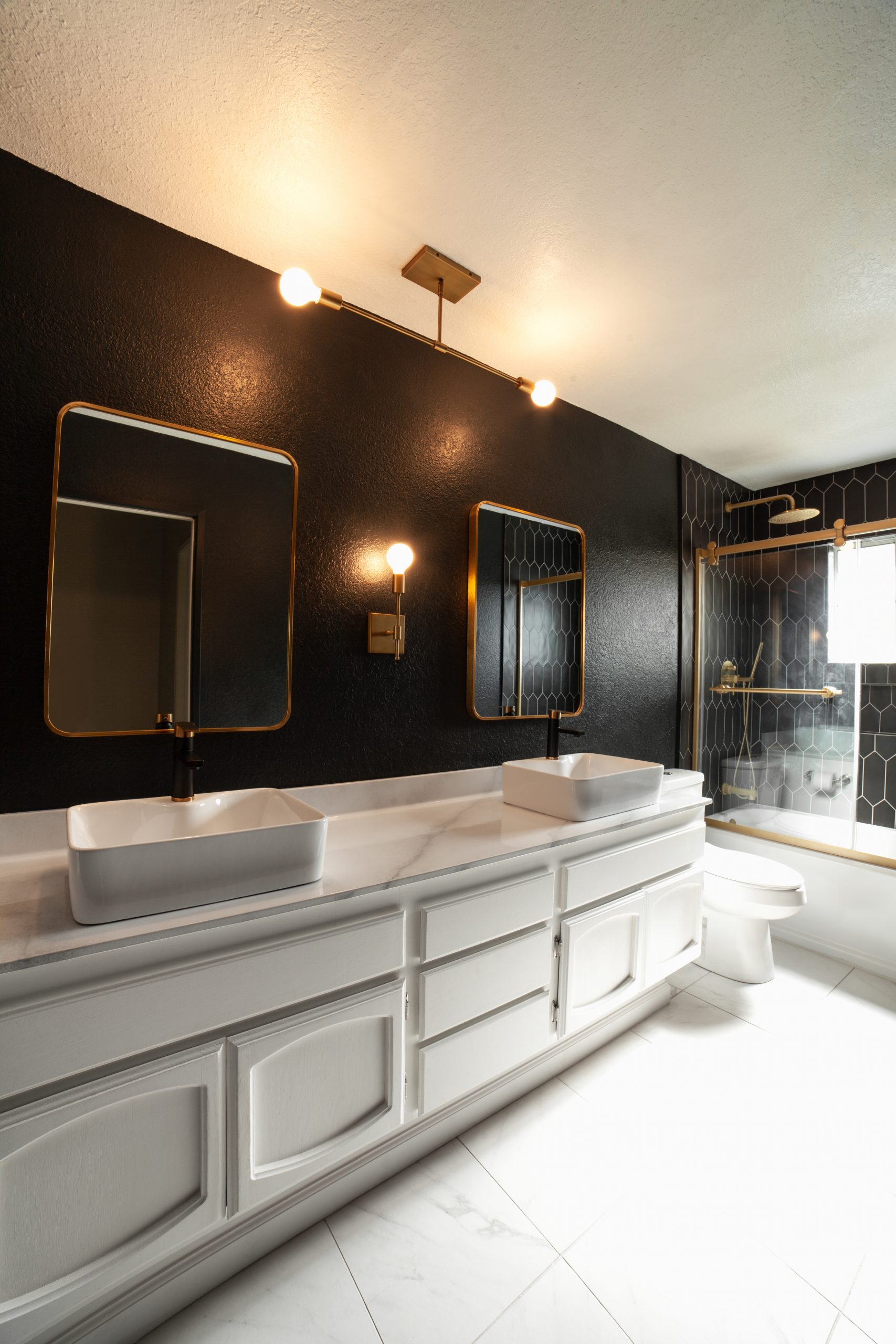 I really feel like the new counters tied the design of this whole bathroom together, and I’m super happy that I made the leap and painted my counters. I was so hesitant to paint them and was close to leaving the counters untouched, but this really completed the modern look!

You can check out the Giani Marble Countertop Paint Kit here and check out their complete line of countertop paint kits here, ranging from marble, to granite, to butcher block-style paint kits!  Giani also carries paints for garage doors, cabinets, and more, so I definitely giving their entire catalog a good look. They’re also available on Amazon.

What do you guys think? Would you ever try this on your own counters? Let me know in the comments below. Don’t forget to subscribe to my newsletter and follow me on Instagram for more DIY home improvement and budget-friendly tips! 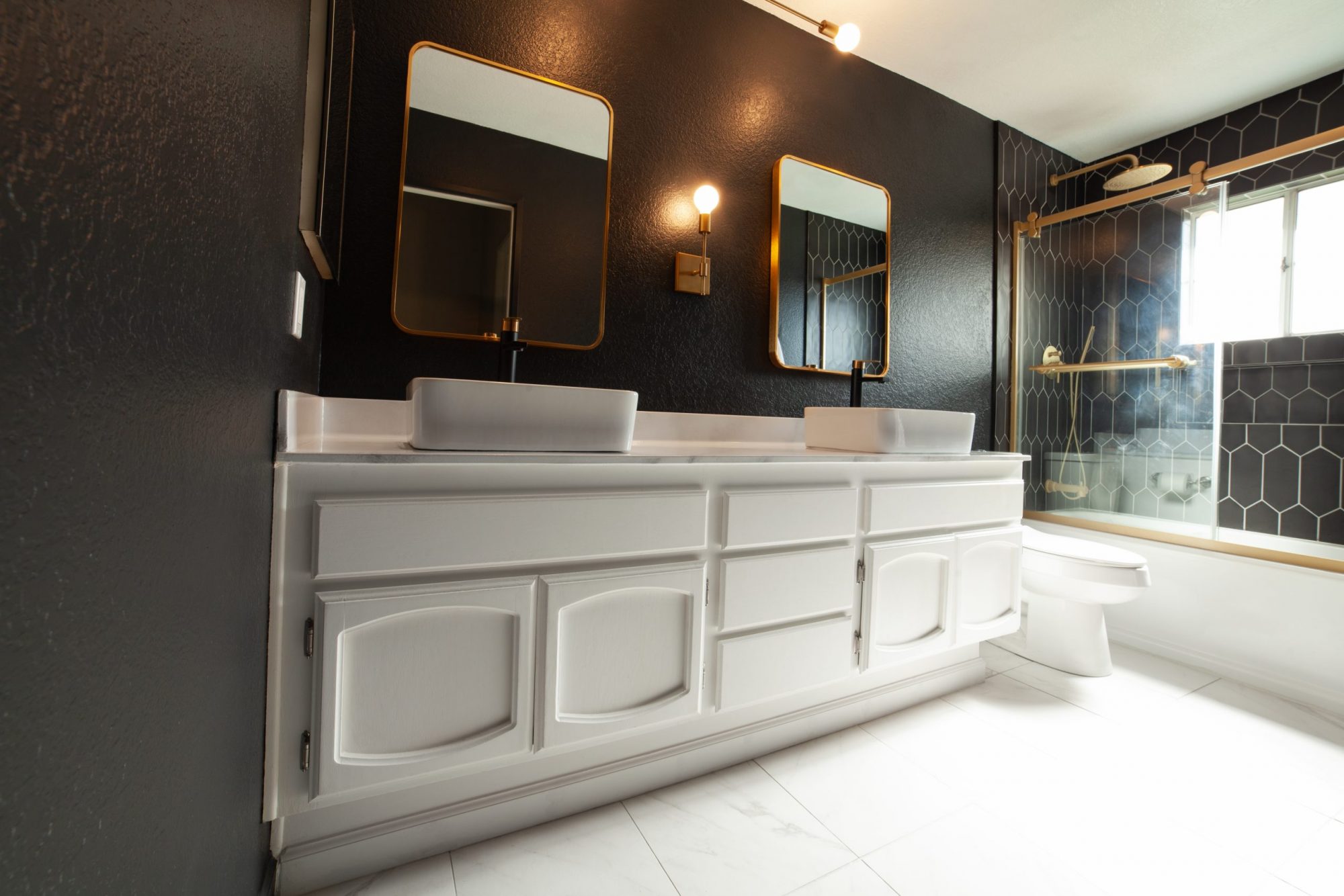